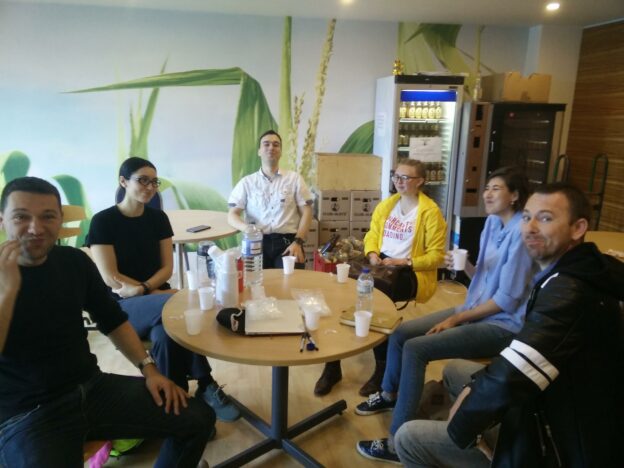 Everyone came with boundless enthusiasm and energy for the DNA workshop on Sunday in the London HackSpace.  There was great DIYBio in the new lab and people helping each other out loads to understand the fundamentals or the practicalities of pipetting, thermocycler, enzymes etc.

The first step of DNA extraction started in the kitchen.  We used a small amount of slightly salty water to get some of our cheek cells… whilst trying not to laugh 😹

Then we went down to the lab and started the protocol to extract DNA from our cells.

The DNA extraction didn’t use an alcohol step like ethanol or isopropyl alcohol, just centrifugation, heat and a lot of pipetting.  Here you can see the cells already starting to precipitate even before the centrifugation:

Credit to Juris for taking some fantastic photos.  I saw a lot of other photos being taken so workshop attendees, please feel free to share them on the slack channel, twitter, meetup.com or the mailing list 😁

We were shortly joined by 3 more keen bio labbers and eventually had a total of 9 samples in different stages of DNA extraction.  And so commenced a lot of centrifugation, and careful pouring and pipetting to remove the supernatants (the liquid above the “pellet” of cells left in the bottom):

We put it in the “thermocycler” for 99oC “cook” for 10 minutes to hopefully break open the cells and release their DNA.  Then followed even more careful pipetting!… ah the life of a biochemist:

Finally after almost three hours we had our samples of DNA from everyone, and set the lactase SNP (Single Nucleotide Polymorphism) PCR running in the Bento Lab thermocycler:

We broke for a well deserved lunch break and everyone washed their hands before they left the lab! 🙂  After lunch we watched a video on PCR in comfort in the class room.  It was a bit more complex than necessary, the guy talks very fast but it provides a solid foundation in what the different parts of PCR are and what you can do with it.

We came back to the lab, admired some agarose (from agar) dissolve in some TBE buffer (Tris, Boric Acid, EDTA) and poured a gel with it.

Whilst a second PCR thermocycle amplification was running in the Bento Lab we prepared the previous lactase PCR products for loading into the gel.

It was getting late in the day so to get some results by the end of the day we decided to run the gel.  We’re couldn’t use the inbuilt Bento Lab power supply as it can’t run the electrophoresis (can go up to 120V!) at the same time as the other components like the thermocycler.  No worry, we’re in one of the best HackSpace’s in the world!… and the electronics lab has a power supply we could borrow.  Admittedly we had to clean it first, someone was etching steel with HP sauce with it the previous day!  😛⚡

The gel finished.  In the interests of combatting #publicationbias we’re posting this failed result.

Unfortunately it looks like the PCR step failed.  You can see the DNA “ladders” fine (the lowest line is DNA that’s 100 base pairs in length, the top one, about 3000).  The dark rectangles at the “top” of the gel are where we loaded the samples in.

We think it’s the PCR step as opposed to the DNA extraction that failed as we compared the DNA extracts from two people vs some DNA from the primers (bottom left), water (middle left), and the two other people’s DNA extracts clearly have fluorescence:

Next step will be to rerun these with an alcohol extraction step (or paper towel?!) and see how it compares.

The DNA extraction protocol we were using was:

Drink half a glass of water to remove any food or particularly thick saliva.
With about 3ml of tap water and “a pinch” of salt, wash your mouth, using your teeth to rigorously but without drawing blood, chew on your cheeks. Use your tongue to help loosen cells.
Transfer into two 1.5ml tubes (one is a backup incase the first doesn’t pellet or you don’t get enough cells).
Spin at 4 kG for 90 seconds to pellet the cells.
Discard supernatant by gently pouring. If pellet not attached, then spin again. If still not attached try to get a second sample. If same as first then try to use micropipette set on 20+ ul to get rid of supernatant and keep the cells.
Resuspend in remaining ~50 to 100ul of supernatant.
Transfer to 0.2ml thermocycler tubes.
Heat at 99oC for 10mins.
Remix.
Centrifuge at 8 kG for 90 seconds
Keep supernatant that looks like water but hopefully has DNA.

Thanks again to everyone who showed up.  It was a great day.

Be sure to join the meetup.com group, follow us on twitter, join our slack channel, or look out on the London HackSpace mailing list for future events.  We’re usually in the lab most Tuesday evenings for the general HackSpace open evening.  And, again, usually, every last Tuesday of the month is when more biohackers meetup in the kitchen, get some pizza, chat, and then go down to the lab and explore, build, test, learn!  😁