In the molecular biology of bacteria, it is often useful to work with bacteria at the most productive stage of their population growth cycle. Bacterial populations exhibit 4 characteristic growth phases. The most productive phase of growth is referred to as the Exponential or Log phase. The OD600 Spectrophotometer is a piece of equipment used to determine the point in time at which a bacterial population growing in a liquid reaches its exponential growth phase. It does this by measuring the amount of light

When a small number of bacteria are introduced into a new environment, for example during a wound infection, or when inoculating a flask filled with nutrient media in a biolab, the bacteria initially do not divide rapidly. By observation with a light microscope they do not appear to be doing much. However looks can be deceiving and internally the bacteria are preparing themselves, and taking on board nutrients, conditioning their immediate environment with chemicals and beginning the process of duplicating their organelles. The rate of division during this phase is very low, and the total number of bacteria in the population remains flat. During this phase the bacteria are said to be in the latent or lag phase. The chart of their total number looks something like this: 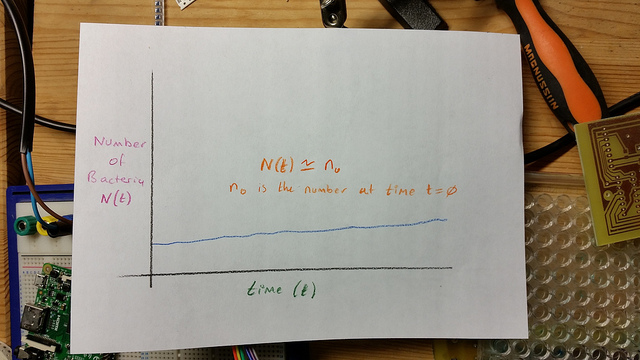 After a period of time, which depends on many factors including the strain/species and state of the external environment, including temperature and media constituents, the bacteria exhibit a change in reproductive behavior. Each bacteria becomes fully committed to reproduction by division to produce daughter cells, and those progeny cells are also committed to doubling as long as conditions remain favorable. These cells proceed to produce grand daughter cells following an approximate doubling time. This constant doubling time produces an exponentially increasing population count for the bacteria. 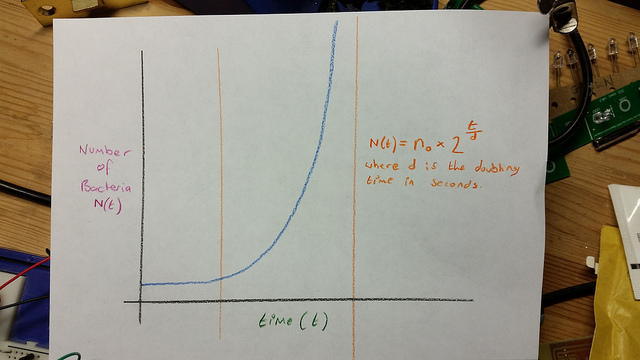 This stage is known as exponential phase, and more specifically the mid-exponential phase of growth is the most productive of that. This phase is also referred to as the “log phase”, because plotting the log of the cell number against time produces a straight line.

So a protocol might say something like “take a mid-log phase culture of DH5-a….” and what it is saying is to start a culture of bacteria, and let it grow until it is mod-log-phase, and then use them at that point in time. 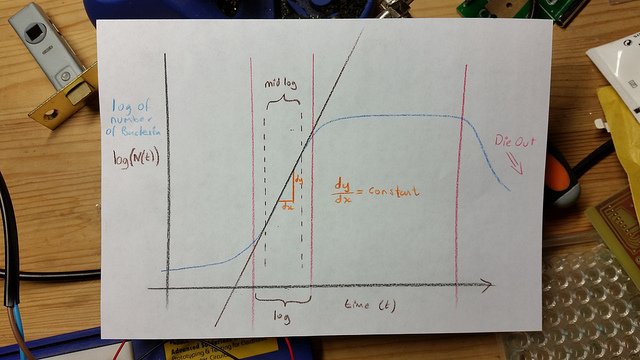 The higher the concentration of bacterial in a liquid culture, the higher the optical density of that culture when measured. Organic material has high optical density at light with wavelength 600 nanometres, and light at this wavelength is in the middle of the visible wavelength and easy to produce as measure. The optical density of a sample at 600 nanometres is referred to as OD600. The measured OD600 of the sample relative to a plain reference sample, gives an estimate of the concentration of the cells in the liquid, which can be used to estimate the growth phase of the population.

The basic idea is to compare a sample of plain media, and a sample of media in which bacteria has been growing. Initially the levels of bacteria will be very low, and the amount of light absorbed by the 2 samples will be similar.

The 2 samples are then placed in an incubator, and over time as the number of bacteria grow, this relative value will change according to the growth phase of the bacteria. At the beginning the OD600 measures close to zero, because the bacterial population in is the early lag growth phase, and there are few bacteria in total. Reproduction accelerates, and the bacteria are at their most reproductive during the log or exponential phase, which usually corresponds to 0.5-0.6 OD600. Beyond these values, the bacterial population will stabilize and then decline. 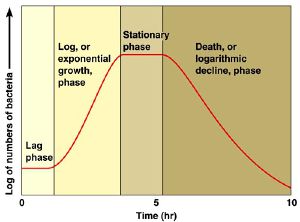 Beyond the stationary phase, the OD600 will continue to increase, and the media will darken, but this is mostly due to large numbers of dead bacteria in the mixture. Populations of bacteria at this phase can be used to inoculate a fresh culture, but are generally useless for competency.

600nm is in the visible wavelength an is approximately orange. These are some 605nm LEDs from ebay. 600nm light is preferred to UV for example, because its much less phototoxic at those energies. It is also a wavelength at which organic materials readily absorb light.

The idea is to make a cheap, robust, reliable hand held device that would do OD600 within the requirements of a diybio lab. The initial brain storming is to take a broad wavelength source of light which includes plenty of 600nm and use a 600nm BP filter and a level detector, and calibrate it to match 0.4 at OD600 on a proper spectrophotometer. 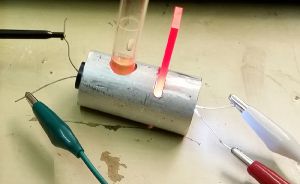 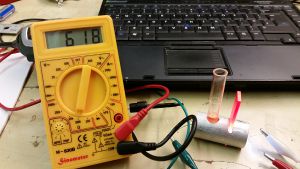 At the moment the main issue is that the LDR (light dependent resistor) only sees about 20 ohms of difference between the initial inoculation and the mid-log phase, which shows as 0.4 OD600 on a spectrophotometer.

It really needs some amplification and a lot more light shielding.

the second idea (once the 605nm LEDs had turned up from ebay); 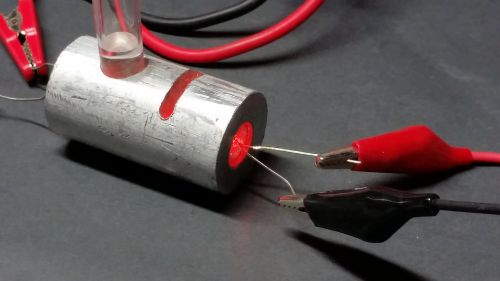 If you don’t have access to a spectrophotometer, (or even if you do), this should be a convenient way to estimate OD600 values for your sample

A secondary project is to cast some 12mm x 12mm resin blocks to be used for calibration against a system that takes a cuvette.

Here is a document describing various methods for calibrating spectrophotometers;

DNA Pol II is only expressed during the stationary period of growth, and so might be used as a marker for the end of exponential growth

“We designed and built a low cost electronic system for measuring light output, this is useful for reporter assays.”

“Measuring Optical Density (OD) or absorbance is one of the indispensable elements in the field of microbiology. One question that has to be answered often is how many cells are in a suspension? Here, the OD can give a hint. However, the commercially available OD meters are expensive and limit its application and usage in low budget institutions.

Therefore, here we present our OD/F Device. The device is specifically designed for biohackspaces, Do It Yourself (DIY), community laboratories and schools. With our OD/F Device, we aim to enable precise and inexpensive scientific research.”

The procedure is normally carried out using a visible light capable spectrophotometer like this one;

But one of these, the are not that expensive?