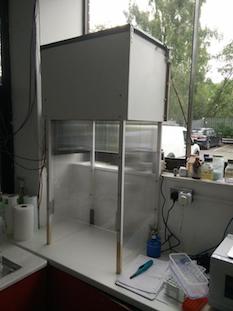 After a long wait we finally got the time to plan and build the second generation Laminar Flow Hood. We’ve been wanting to get this up and running as a necessary prerequisite of more advanced microbiology and molecular biology experiments. Keeping your cells separate from all the bugs floating around the air is really important!

We started with the components from Mark 1, including the calculations which we double checked and left unchanged.

There’s a soft seal on one side of the filter which we left on the output side.

This is one of the only weak points we can think of in the design as we couldn’t leverage it to help seal round the top of the plastic walls as they sit inside the legs supporting the filter box:

The “final” design is shown below. Notable additions or changes upon implementation:

Attempt 4 of recreating the mythical lactose-yeast extract media also failed when the milk proteins precipitated. We decided to pour 4 petri dishes anyway and test the new (by then not so new) laminar flow hood. We did this whilst the hood was running and followed good aseptic technique: sprayed down the surfaces and everything going into the hood with 70% IPA, kept items in the middle of the hood, had the hood away from other sources of air flow like open windows, open doors, others moving around the lab. We left all 4 petri dishes exposed inside the hood to cool down for 10 minutes. We then left 2 exposed inside the laminar flow hood and then took 2 of them around the HackSpace for a little walk.

After a few days we checked the petri dishes again and got the following very welcome result on one of the sterile plates: No growth!

And the wood workshop petri dish went thoroughly berzerk. The bright orange mould hyphae had actually escaped from the edges of the petri dish…

To make the lab safe again we cooked the petri dishes in some turkey roasting bags inside the pressure cooker.

… it had been on our todo list to try these out and they worked great!